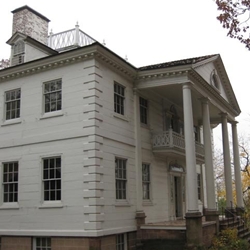 Located within Roger Morris Park, Manhattan’s oldest surviving house, Morris-Jumel Mansion, is a monument to colonial grandeur. Built in 1765 as a summer retreat for British colonel Roger Morris and his American wife Mary Philipse, this house is the only survivor of a number of similar country houses built by wealthy New Yorkers. Morris, the nephew of a successful English architect, was greatly influenced by the designs of the 16th-century Italian architect Palladio. His sophisticated residence includes a monumental portico and pediment, supported by grand Tuscan columns, and a large, two-story octagonal addition at the rear, one of the first of its kind in the country.