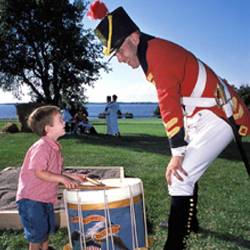 Following the outbreak of war between the United States and Great Britain in June 1812, Sackets Harbor became the center of American naval and military activity for the upper St. Lawrence Valley and Lake Ontario. In an attempt to destroy the American shipyard, a British-Canadian force launched an attack on May 29, 1813, while the majority of the American forces were attacking Fort George. In December 1814, the Treaty of Ghent officially ended the War of 1812, and the fleet was placed in storage. After the war the earthen fortifications were graded off and the battlefield reverted to farmland.