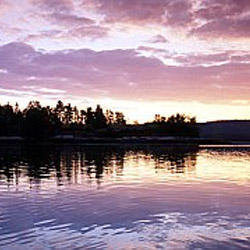 A monument to the beginning of the United States and Canada. In 1604, Pierre du Gua (sieur de Mons), accompanied by Samuel Champlain and 77 other men, established a settlement on St. Croix Island. Preceding Jamestown (1607) and Plymouth (1620), Pierre du Gua’s outpost was one of the earliest European settlements on the North Atlantic coast of North America. More specifically, it was the first attempt by the French at year-round colonization in the territory they called La Cadie or l’Acadie (Acadia). The settlement was short-lived, however, and in the summer of 1605, the French moved to a more favorable location where they established the Port Royal Habitation on the shores of the present-day Annapolis Basin, Nova Scotia.