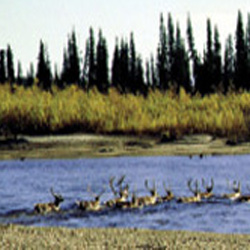 It could be argued that Selawik National Wildlife Refuge contains some of the most historically significant acreage in North America, as the refuge lands once formed part of the American portion of the vast Bering Land Bridge that, some scientists speculate, was the route followed by the ancestors of many of today’s large mammals, as well as early humans, when traveling between Asia and the America’s some 12,000 years ago.