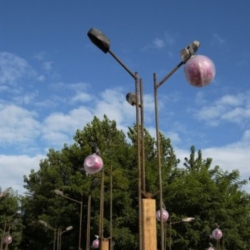 The story of this unique park demonstrates how a community can organize to reclaim and create a positive public space. Situated at the confluence of the Harlem and East Rivers, the site has a picturesque view of “Hell Gate,” or “Hellegat” as originally named by the Dutch colonists. Throughout the 17th and 18th centuries, this narrow strait between Astoria and Wards Island was infamous for treacherous navigational conditions caused by powerful tides and dangerous rock outcroppings. The 1780 shipwreck of the British ship Hussar and numerous other marine tragedies which occurred in this channel necessitated an 1876 effort by the Army Corps of Engineers to blast away much of the dangerous ledge. Unfortunately, in the years preceding 1985, the long-abandoned Marine Terminal had become desecrated with illegal dumping and graffiti, its panoramic vista inaccessible to citizens of Astoria and Long Island City.