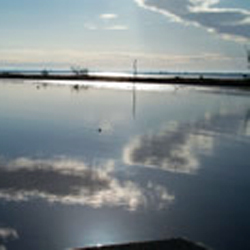 The Sonny Bono Salton Sea National Wildlife Refuge (Refuge) is located 40 miles north of the Mexican border at the southern end of the Salton Sea in California’s Imperial Valley. Situated along the Pacific Flyway, the Refuge is the only one of it’s kind, located 227 feet below sea level. Because of its southern latitude, elevation and location in the Colorado zone of the Sonoran Desert, the Refuge experiences some of the highest temperatures in the nation. Daily temperatures from May to October generally exceed 100 F with temperatures of 116 -120 F recorded yearly.