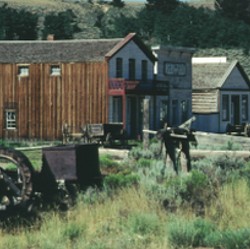 South Pass City began with a boom in 1867 with the discovery of gold on the southeastern end of the rugged Wind River Mountains. By 1868, Wyoming’s City of Gold boasted over 250 buildings along the banks of Willow Creek and the surrounding hillsides. South Pass City hummed with excitement as numerous saloons, stamp mills, hotels, and businesses took advantage of the gold driven economy. Over 1000 people called South Pass City home during this raucous time. South Pass City was the first of three towns established due to the discovery of gold in what became the Sweetwater Mining District. In addition to Atlantic City and Hamilton City (now called Miner’s Delight), Fort Stambaugh was erected to protect the miners in their search for gold from hostile Indians.