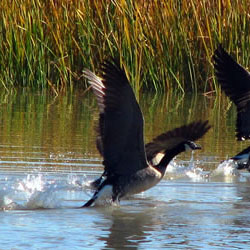 Stillwater National Wildlife Refuge is located in the Lahontan Valley, near the community of Fallon, sixty miles east of Reno. The Stillwater wetlands are well-known to birders, as this area has been designated a site of international importance by the Western Hemispheric Shorebird Reserve Network because of the hundreds of thousands of shorebirds, such as Long-billed dowitcher, Black-necked stilt, and American avocet passing through during migration. Also listed as a ‘Globally Important Bird Area’ by the American Bird Conservancy, more than 280 species have been sighted in the area. These tremendously rich and diverse wetlands attract more than a quarter million waterfowl, as well as over 20,000 other water birds, including American white pelicans, Double-crested cormorants, White-faced ibis, and several species of egrets, herons, gulls, and terns.