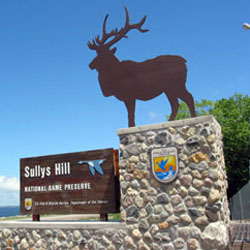 President Theodore Roosevelt, by signing a presidential proclamation, set aside Sullys Hill as a National Park in 1904. In 1917 and 1918, elk, bison and white-tailed deer were reintroduced to Sullys Hill to further enhance its once native state. On March 3, 1931, Congress transferred Sullys Hill to the National Wildlife Refuge System where it would be maintained as a “Big Game Preserve, refuge and breeding grounds for wild animals and birds.” The Preserve is one of four refuges managed by the U.S. Fish and Wildlife Service for American bison and elk. Sullys Hill is part of a complex of refuges managed by the Devils Lake Wetland Management District.