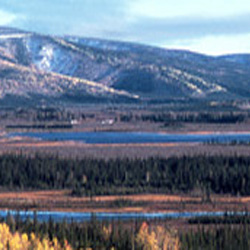 A dynamic landscape made up of forests, wetlands, tundra, lakes, mountains and glacial rivers bounded by the snowy peaks of the Alaska Range. This upper Tanana River valley has been called the “Tetlin Passage,” because it serves as a major migratory route for birds traveling to and from Canada, the lower 48 and both Central and South America. Many of these birds breed and nest on the refuge. Others pass through on their way to breeding and nesting grounds elsewhere in the state. Migrants, including ducks, geese, swans, cranes, raptors and songbirds, begin arriving in the valley in April, and continue into early June. An estimated 117 species breed on Tetlin during the short summer, when long days and warm temperatures accelerate the growth of plants, insects and other invertebrates, providing a ready source of rich foods for nesting birds.