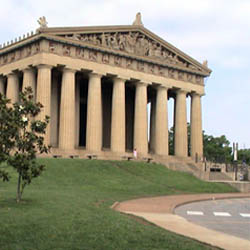 The Parthenon stands proudly as the centerpiece of Centennial Park, Nashville’s premier urban park. The re-creation of the 42-foot statue Athena is the focus of the Parthenon just as it was in ancient Greece. The building and the Athena statue are both full-scale replicas of the Athenian originals. Originally built for Tennessee’s 1897 Centennial Exposition, this replica of the original Parthenon in Athens serves as a monument to what is considered the pinnacle of classical architecture. The plaster replicas of the Parthenon Marbles found in the Naos are direct casts of the original sculptures which adorned the pediments of the Athenian Parthenon, dating back to 438 B.C. The originals of these powerful fragments are housed in the British Museum in London. The Parthenon also serves as the city of Nashville’s art museum. The focus of the Parthenon’s permanent collection is a group of 63 paintings by 19th and 20th century American artists donated by James M. Cowan. Additional gallery spaces provide a venue for a variety of temporary shows and exhibits.