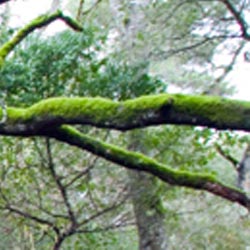 The Coast Miwok people were the first to inhabit the coastal area of sheltered coves, beaches, tidal marshes, and forest of Bishop pines now known as Tomales Bay State Park, forty miles north of the Golden Gate Bridge. Sir Francis Drake was the first explorer to land in this area in 1579, followed by the Spanish in 1595. Russian and German scientists explored the area in the early 1800s. In the 1940s real estate developers began to purchase large areas of beachfront land, prompting local residents and conservation groups to save this area as a park. In 1952, Tomales Bay State Park was formally dedicated and opened to the public.