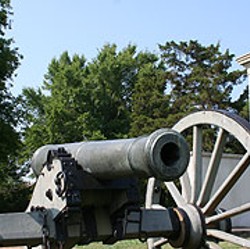 In the spring of 1864, Major General William Sherman prepared his army to take Atlanta and susequently “march to the sea”. A primary concern of Sherman’s was Major General Nathan Forrest’s Confederate corp of mounted infantry roving the mid-South. Sherman ordered several advances from Federally controlled Memphis into north Mississippi for the purpose of keeping Forrest in Mississippi and not behind Sherman, cutting communication and supply lines. On July 13-15, 1864, the battle of Tupelo was the result of one of those advances by Major General Andrew J. Smith. Although the Federals retreated to Memphis after the battle, it was a Federal victory: Forrest was not able to interfere with Sherman’s Georgia campaign.