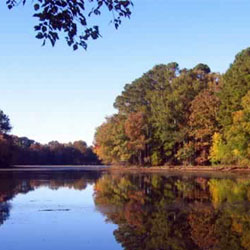 Wheeler NWR, located along the Tennessee River between Huntsville and Decatur, was established in 1938 to provide habitat for wintering and migrating birds. Considered the easternmost Refuge in the Mississippi flyway, this 34,500 acre Refuge attracts thousands of wintering waterfowl each year and supports the southernmost and Alabama’s only significant concentration of wintering Southern James Bay Canada geese. It also serves as winter habitat for the State’s largest duck population. In addition to migratory birds, the Refuge hosts 115 species of fish, 74 species of reptiles and amphibians, 47 species of mammals, and 285 different species of songbirds. The Refuge is also home to 10 federally listed endangered or threatened species.