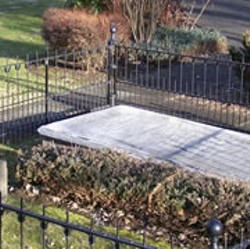 This site commemorates the courage of Marcus and Narcissa Whitman, the role the Whitmans played in establishing the Oregon Trail, and the challenges encountered when two different cultures meet. In 1836, before the wagon trains, a small intrepid group of Presbyterian missionaries traveled with the annual fur trapper’s caravan into Oregon Country. Missionaries Narcissa Whitman and Eliza Spalding became the first white women to travel across the continent. Differences in culture led to growing tensions between the Cayuse people and the Whitmans. Their mission became an important stop along the Oregon Trail, but passing immigrants added to the tension. A measles outbreak in 1847 killed half the local Cayuse. Some of the Cayuse blamed these deaths on Dr. Whitman. Dr. and Mrs. Whitman were killed; sixty people were taken hostage. The deaths of the Whitmans sent a shock wave across the country and prompted Congress to make Oregon a U.S. territory.