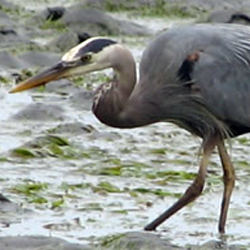 Willapa National Wildlife Refuge is located on Willapa Bay, one of the most pristine estuaries in the United States. Willapa Bay is the second largest estuary on the Pacific coast and includes over 260 square miles of water surface. Many salmon species are found in the watters of Willapa Bay, including chum, chinook, and coho. The refuge preserves several unique ecosystems, including diverse salt marshes, muddy tideflats, rain-drenched old growth forests, and dynamic coastal dunes and beaches. Freshwater marshes and grasslands are found along the southern shore of the bay.