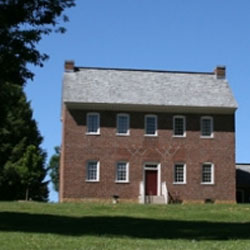 William Whitley House is the first brick home in Kentucky, and the site of the nation’s first circular racetrack, completed in 1788 by Kentucky pioneer William Whitley and his wife Esther. The estate, known as Sportsman’s Hill, was famous for its unusual architectural features, and it became a gathering spot for early Kentuckians, including George Rogers Clark and Daniel Boone.