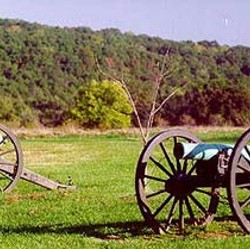 Wilson’s Creek was the first major Civil War battle fought west of the Mississippi River, and the scene of the death of Nathaniel Lyon, the first Union general killed in combat. Although a Southern victory, the Southerners failed to capitalize on their success. With the exception of the vegetation, the field has changed little and remains in near pristine condition.